IIBN fosters sustainable applications of biotechnology for innovative farming and inclusive industrial development with a focus on low and middle income countries.

IIBN is a responsive, not-for-profit stakeholder network. By catalyzing synergies and partnerships, IIBN augments international cooperation opportunities, leverages resources, and attracts investments in R&D and capacity building supportive of the IIBN engages in mapping the needs and opportunities in developing and emerging economies through knowledge and information sharing, fact finding missions, and stakeholder meetings.

IIBN also catalyzes initiatives that strengthen human capacities, develop or adapt biotechnology methods and products to the conditions in low and middle-income countries.

The VIB-Ghent University, International of Plant Biotechnology Outreach serves as a first point of contact for enquiries about expertise available in the IIBN network and opportunities for capacity building and project development.

IIBN is an international stakeholder network with four Founding Members from Burkina Faso, Brazil, China and Belgium and two Patron Agencies, the UN Industrial Development Organization (UNIDO) and Flanders Government. IIBN has a governance structure consisting of the Founders Committee and a Secretariat. The Founders Committee is composed of the four Founding Members and the two Patron Agencies with following representatives:

The Secretariat supports the day-to-day activities of the IIBN in accordance with the IIBN Charter. The VIB-UGent, International of Plant Biotechnology Outreach has assumed the role of Secretariat during the establishment fase of IIBN.

FURARN is an international coordination action project funded by the Research Foundation – Flanders (FWO Vlaanderen) and UNIDO. The aim of the network is to bring together scientists and biosafety experts with complementary expertise in fields allowing the risk assessment of a GMO.

As a networking institute and focal point bringing together different disciplines in the field of biotechnology and biosafety, the Institute of Plant Biotechnology for Developing Countries (IPBO) acts as the coordinator of the FURARN network.

Within this framework, FURARN developed DTREEv2, a decision-support software tool for the identification of hazards related to the release of GM plants into the environment.

The emerging bio-economy is increasingly viewed as a workable alternative to move today’s economies in the direction of more sustainable natural resource use and economic growth in different parts of the world.

The ALCUE-KBBE project is creating a platform between relevant stakeholders in Latin America and the Caribbean and the European Union to design and implement enabling R&D agenda’s and policy instruments for the development and consolidation of the bio-economy in both regions.

“ALCUE-KBBE is a Coordination and Support Action supported by the European Commission Seventh Framework Programme for RTD food, Agriculture, Fisheries and Biotechnologies.”

Lathyrus sativus (grass pea or chickling vetch, guaya in Ethiopia, khesari in India) is a daily food for millions in Asia and Africa. It was already harvested in neolithic times and is still a popular and promising crop, producing the cheapest dietary protein available. The plant is probably the most drought tolerant legume crop and also resistant to moderate salinity. The plant is notorious for its ability to withstand flooding as well as drought, and in drought prone areas is considered an insurance crop and survival food for subsistence farmers. During drought-triggered famines, grass pea can be the only food available.

As all legumes, grass pea is deficient in the sulfur amino acids methionine and cysteine and thus is not a well-balanced nutrient. Besides this, the seeds contain variable amounts of a neuro-excitatory amino acid b-oxalyl-L-a,b-diaminopropionic acid or ODAP. This is considered as the cause of the crippling disease neurolathyrism, a neurodegenerative disease often occurring in epidemics (up to 6% of the population) after famines in the Indian subcontinent or in Ethiopia, when grass pea seed has been the exclusive or main food during several months.

Cassava or manioc (Manihot esculenta Crantz, fam. Euphorbiaceae) is a tropical food crop widely grown in Africa, Asia and Latin America. The leaves are consumed as green vegetables and the roots as staple food in most of the cassava growing countries particularly in Democratic Republic of Congo (DRC), Congo-Brazzaville, Gabon, Cameroon, Liberia, etc.

The world production is estimated at 128 million Mt/year. The plant grows as a shrub, is undemanding in terms of soil fertility and inputs, and is the second best producer of food energy per land unit after sugar cane. It can be harvested any day of the year and forms the staple food for more than 500 million people. Its importance in food security, especially for subsistence farmers and underprivileged communities may increase further as an effect of global warming. People in Democratic Republic of Congo (DRC) call cassava an “all sufficient food” because from leaves, they get “meat (protein) or sauce” and from roots, they get “bread”. Cassava roots form one of the most important staple foods in Sub-Saharan Africa. In DRC, more than 70 % of the population consumes products of cassava roots as staple food every day. 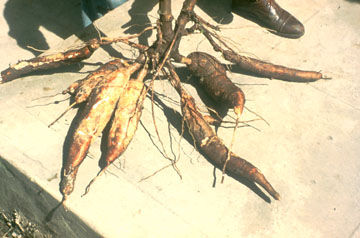 Both leaves and roots of cassava contain varying amounts of cyanogenic glycosides, mainly linamarin and lotaustralin, which produce cyanide and are very toxic to human. Consumption of unprocessed bitter cassava is considered suicidal. Thus, cassava requires post harvest processing into various safe products. A large number of processing methods are combinations of several methods (peeling, slicing, soaking, retting, fermenting, boiling, drying, roasting, pounding, milling, etc) that attempt to remove the poisonous principle in cassava as much as possible. Cassava is processed into many different products such as gari, chikwangue, cossettes, fufu, tapioca, etc.